Sometimes projects or “things” come up and drive you to pursue them, based on a direction preset by your ancestors. They knew a time would come when one of their lineage would be prepared to receive and when the timing would be right, where all junctures would come together for an activation or a mass healing. Something on so vast a level it could not be explained as to the working or even the desired outcome. 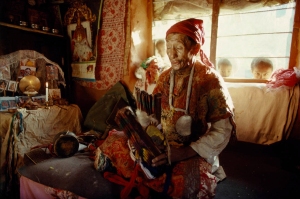 A Tibetan shaman communicates with the ancestors for guidance.

In the case of working and maintaining a proper ancestor altar, you are actually not only strengthening the connection, but also strengthening the ancestor or group of ancestors so they can be more effective in your life and possibly even the lives of the extended family.

As the elders say, the ancestors cannot connect with us ( I have found exceptions to this rule through strong familial bonds), so you must first seek connection with them. You must open the door, you must maintain the connection,  or it will fade over time. Yes, it can be regained through ancestor veneration rituals, but isn’t it easier to maintain the connections all along? I say yes.

Ancestor veneration priests and shamans are very specialized in most traditions. In Yoruba traditions from West Africa they are an entire sect that is ruled by Oya and the ancestors themselves. They are usually trained from birth.  Traditional indigenous Tibetan sects have very elaborate death rites to assist the soul of the departed in a “conscious” evolutionary process.  These rituals are performed to help the soul make a good choice of incarnation that actually has effect on the larger consciousness construct rather than entering another life of working out right/wrong, black/white and more polarity consciousness.

I have noted before, as with other sacred things, that some have been bastardized by religion and religious organizations for its/their own purposes. So other than in traditional indigenous cultures that elevate and venerate their beloved ancestors, the said religion has plans for you even after you are dead.

So do your own thing and make it good.

Remember, sometimes these promptings come from a well much deeper than your current life. “The changes we effect here go backward and forward on the time track.” ~SL 2014